Sport In The Mountains 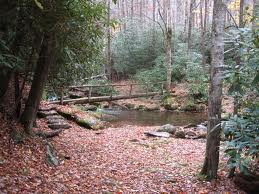 Sport has always been a bright thread woven into the fabric of the mountain folkways.  The area’s steep ridges and deep hollows were cherished bear hunting territory.  Small game, most notably squirrels, grouse and wild turkeys was also plentiful and avidly pursued, especially in those halcyon days before the demise of that mighty monarch of mountain forests, the American chestnut.

Similarly, streams coursing through these hills – like so many laughter lines on an old man’s face – were prime destinations for trout fishermen and in their lower reaches, they provided angling variety in the form of smallmouth and redeye bass.

Hunting and fishing held pride of place among all masculine recreational pursuits for mountain folk, but their importance extended well beyond providing an ample measure of simples pleasure and release from the grinding work and considerable hardship associated with hardscrabble way of life.  Game and fish meant sustenance, and many a mountain table was regularly graced by nature’s rich, tasty bounty.