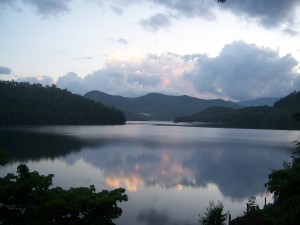 Have you memories of a shimmering lake, crisp earth, twinkling stars, and sweet smells of a campfire? They will be revitalized with a visit to Lake Santeetlah. Nestled in the Smokey Mountains of Western North Carolina and surrounded by the Nantahala National Forest, Lake Santeetlah is an unspoiled treasure. With over seventy miles of protected shoreline, Lake Santeetlah’s 3,000 acres are a serene reminder of the beauty nature has to offer. A shining example of conservation and stewardship, Lake Santeetlah will remain shielded from the intrusive world for generations to come. Offering year round high levels of refreshing mountain water, due to stringent governmental licensing, Lake Santeetlah provides an ideal place to swim, canoe, kayak, and fish or the perfect backdrop to do nothing at all.

Due to its mountainous terrain, Graham County was one of the last sections of the eastern United States to be settled by Europeans. Robbinsville was not incorporated until 1893, and it had only two hundred residents in 1915. The area known as Santeetlah along the Cheoah River was sparsely settled, and in any case, the river valley was flooded after Santeetlah Dam was completed in 1928. In 1939, the U.S. Forest Service purchased from Carolina Aluminum Company the land now occupied by the town of Lake Santeetlah.

The father of Lake Santeetlah was Kenneth S. Keyes, Sr. (1896-1995), a native of Detroit, who became an extremely successful real estate dealer in Miami, heading over fifty corporations that operated hotels, office buildings and other realty enterprises in Florida, New York, and Canada. In 1957 he served as president of the National Association of Realtors.

In 1947, Keyes exchanged with the Forest Service some land he held for the area that is now the town of Lake Santeetlah. For undetermined reasons he called the property “Thunderbird Estates.” Apparently Keyes hoped to build a large hotel complex in the area of the community now known as Chalet Village, and that area was graded in preparation for building. Nevertheless, although he hired a Miami architectural firm to draw the plans, Keyes never built, and in 1958, he sold the undeveloped property to another Florida land developer who transferred it again in 1961.

In the early 1960s, a new corporation, Smoky Mountain Resorts, built a lodge and some cabins, and the first landowners began to build on the north shore of the peninsula. The lodge, with its two faux totem poles, became “the heartbeat of Thunderbird Mountain Resort” with activities that included square dancing, bingo, movies, and church services, as well as a place “to gather together when the mail was delivered.” Although roads were graded and paved and a water system installed, “Thunderbird Mountain Club Resort,” as the development was first called, was “always short of capital.” In 1971, Smoky Mountain Resorts sold its interest to W. Bennett Collette, “a dabbler in buying financially distressed properties.”

Collette transferred the properties around among his various companies, and by 1973, he had clearly communicated to the residents that he was not interested in operating the water system. The Thunderbird Homeowners Association-later, Thunderbird Property Owners Association-which had been formed in 1969 and incorporated in 1971, began to investigate the possibility of taking over the water system itself, not without disharmony among the members. In 1979, the Insurance Commissioner of Indiana confiscated the assets of Collette’s now-defunct Pilgrim Life Insurance Company, and the State of Indiana briefly owned Thunderbird Mountain before selling it to Executive National Life Insurance in 1981.

In 1988, Thunderbird Mountain became the Town of Santeetlah, and 1991, Executive National transferred the roads and the water system to the town. Through state grants and assessments on the properties (including those of the insurance company), a new water system was created and the roads were repaved. The same year a volunteer fire department and community center was constructed. Ten years later, in 1998, a town hall was dedicated on the Fourth of July. 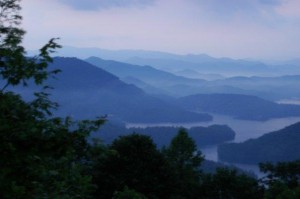 In 1979, the State of North Carolina had prohibited any new connections to the antiquated water system. Although property sales and home construction did not completely cease-a builder could drill his own well-the completion of the new water system in 1995 occurred simultaneously with a new round of construction. Homes built in the 1990s and first decade of the new century tended to be much grander than the simple cottages of the 1960s. The lodge, which had operated only sporadically during the preceding decades, was recycled into the sales office of an upscale lake-front development called Santeetlah Lakeside, and million-dollar property transfers occurred for the first time. In 2007 the Town announced that tax revenues from escalating property values were accumulating so quickly that it had decided to slightly reduce millage rates.